ApeCoin has returned 18% in a week.

The launch of an NFT marketplace and expected staking feature is boosting the token.

Further recoveries will depend on whether a breakout will occur at $4.2.

ApeCoin (APE/USD) has risen by double digits in the past few days. As of press time, the cryptocurrency was up 18% in a week. APE has now lost an intraday 0.78% as it hit a crucial resistance. The recent launch of an NFT marketplace has been fueling gains alongside an expected staking interface.

Staking allows users to lock their crypto tokens to a protocol to earn rewards. By staking, users contribute towards the stability of the ecosystem. Beginning December 05, APE staking will go live and pave the way for a pre-deposit. APE holders will start to earn rewards on December 12. The announcement, made on November 23 by Horizen Labs, however, raised criticism over the locking out of users in some territories, including the US. Regulatory concerns were cited as the reason for blocking them.

Nonetheless, investors could be accumulating APE ahead of the crucial December date. Should this turn out to be a bullish trigger, APE would break out and overcome a prolonged downside. It is still too early to speculate, as we have seen cryptocurrencies reacting ahead of major developments. With that in mind, keeping a tab on the technical side of APE trading would help. 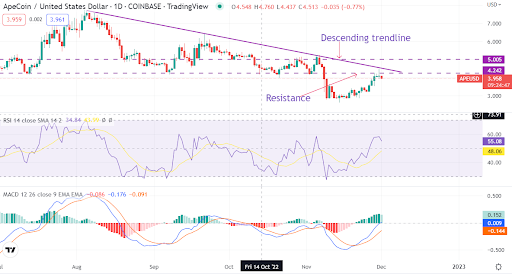 The long-term technical outlook is bearish for APE. The token’s price is testing the resistance at $4.2, and momentum has weakened slightly. The resistance lies in the same zone as the long-term descending trendline.

The MACD indicator has turned bullish and shows momentum is building for APE. The RSI is above the midpoint, indicating that the buyers remain in control.

Should you buy APE?

A breakout at $4.2 or the descending trendline would be needed before buying APE. A successful breakout would take the token to $5 and potentially above $6.

If the breakout fails at $4.2, APE could witness consolidation below the crucial resistance.

Where to buy APE

eToro offers a wide range of cryptos, such as Bitcoin, XRP and others, alongside crypto/fiat and crypto/crypto pairs. eToro users can connect with, learn from, and copy or get copied by other users.

Since 2018 Nexo has strived to bring professional financial services to the world of digital assets. Leveraging the best of the team’s years of experience in FinTech along with the power of blockchain technology, Nexo empowers millions of people to harness the value behind their crypto assets, shaping a new, better financial system.

How bullish is Ravencoin (RVN/USD) after the Binance news?

How bad is the current state of crypto? On-chain analyst explains

Bitcoin Is on a “Poor Investment,” Says…

Socios boss’ goal? To knock crypto out of the park –…

ANKR dips by 5% after Ankr’s aBNB suffered an exploit